Partial mastectomy (surgical removal of a breast lesion) is a very common operation. In cases where the abnormal breast lesion, such as a malignant or cancerous tumor or a suspicious breast lesion are detected on imaging (mammogram, ultrasound, MRI) but arenot palpable and need to be surgically excised, they must be “localized” prior to surgery. Localization is done by the radiologist in the radiology department. It involves the radiologist using image guidance to place something in the breast which the surgeon can then use during the operation to guide the dissection through the breast to the area of concern. This localization is distinctly different than the tissue marker/clip that is placed at the time of core needle biopsy. The tissue marker/clip is about one millimeter and therefore much too small to help the surgeon find the area of concern. Even if a tissue marker/clip is placed at the time of needle biopsy, the lesion must be localized for surgery.There are different ways to localize non-palpable breast lesions.

Wire-guided localization is the technique traditionally used. However,a wire must be placed on the day of surgery and not infrequently this results in delayed surgery and increases the time a patient spends in the hospital because the localization can take 30 minutes or 2 hours depending on where the lesion is, size of the breast, etc. It is difficult to predict.
Recently, techniques have been developed that allow the localization to take place days or even weeks prior to surgery. This allows radiology and surgery to schedule their procedure separately so that on the day of surgery a patient can completely bypass radiology and proceed directly to the operating room. This is more efficient and improves the patient experience.

The Savi Scout is a relatively new surgical guidance system and is a good alternative to wire-guided localization.There are 3 components: the SCOUT reflector, the handpiece and the console.

The reflector is an infrared-activated device that is put into the breast by the radiologist with image guidance prior to surgery. It can be inserted at a facility other than where the surgery will be done. This is important because it eliminates the time-consuming work of tracking down and obtaining outside films and having them reviewed by the hospital radiologist. The Scout reflector is not radioactive, has no external components, and is FDA–approved for placement up to 30 days before the surgical procedure. It is 12-mm long and consists of an infrared light receptor, resistor, and two antennae. It is slightly larger than the tissue marker/clip placed during needle biopsy. 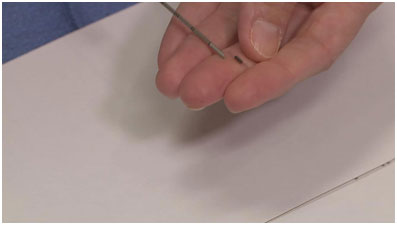 Once the targeted area is localized, it is excised using standard surgical technique. After the lesion has been removed, a specimen mammogram is obtained to confirm that the area of concern, the Scout reflector and the tissue marker/clip have all been removed. This is the same protocol as is done with wire-localization.

Advantages of Scout compared to wire-localization

Disadvantages of Scout compared to wire-localization

No difference between Scout and wire-localization